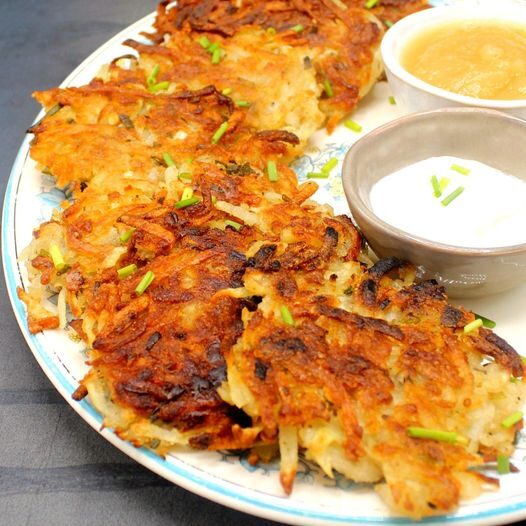 These crispy vegan latkes, Jewish potato pancakes, are gorgeously simple but full of flavor. And they are ready in minutes! Serve these with applesauce or vegan sour cream for breakfast or a snack.

Place the grated potatoes in a dishtowel and wring out as much liquid as you can. Collect the liquid in a bowl.
Let the potato liquid stand in a bowl for five minutes. Then drain out the water that has collected on top, leaving a layer of starch underneath. This is amazing for the latkes and will help them crisp up, so don’t discard it.
Add the potatoes to the bowl with the starch in it. Add remaining ingredients–herbs, breadcrumbs, rice flour, garlic powder, salt and pepper.

Mix well and set aside for five minutes. The salt will help express some more liquid from the potatoes, which in turn will help bind the pancakes. After the batter has rested for five minutes, mix again. The potatoes should feel moist. Form a two-inch ball of the potato mixture and pat into a pancake in your hands to make sure it holds together.
Heat a griddle over medium-high heat and coat the bottom generously with oil. Place the latkes on the griddle and fry until the bottom is golden-brown and crispy.
Flip carefully and continue to cook until the other side is golden-brown. Serve immediately.
Nutrition
Serving: 1latke | Calories: 116kcal | Carbohydrates: 18g | Protein: 2g | Fat: 4g | Saturated Fat: 1g | Polyunsaturated Fat: 1g | Monounsaturated Fat: 3g | Sodium: 19mg | Potassium: 284mg | Fiber: 1g | Sugar: 1g | Vitamin A: 49IU | Vitamin C: 4mg | Calcium: 14mg | Iron: 1mg

No comments to show.