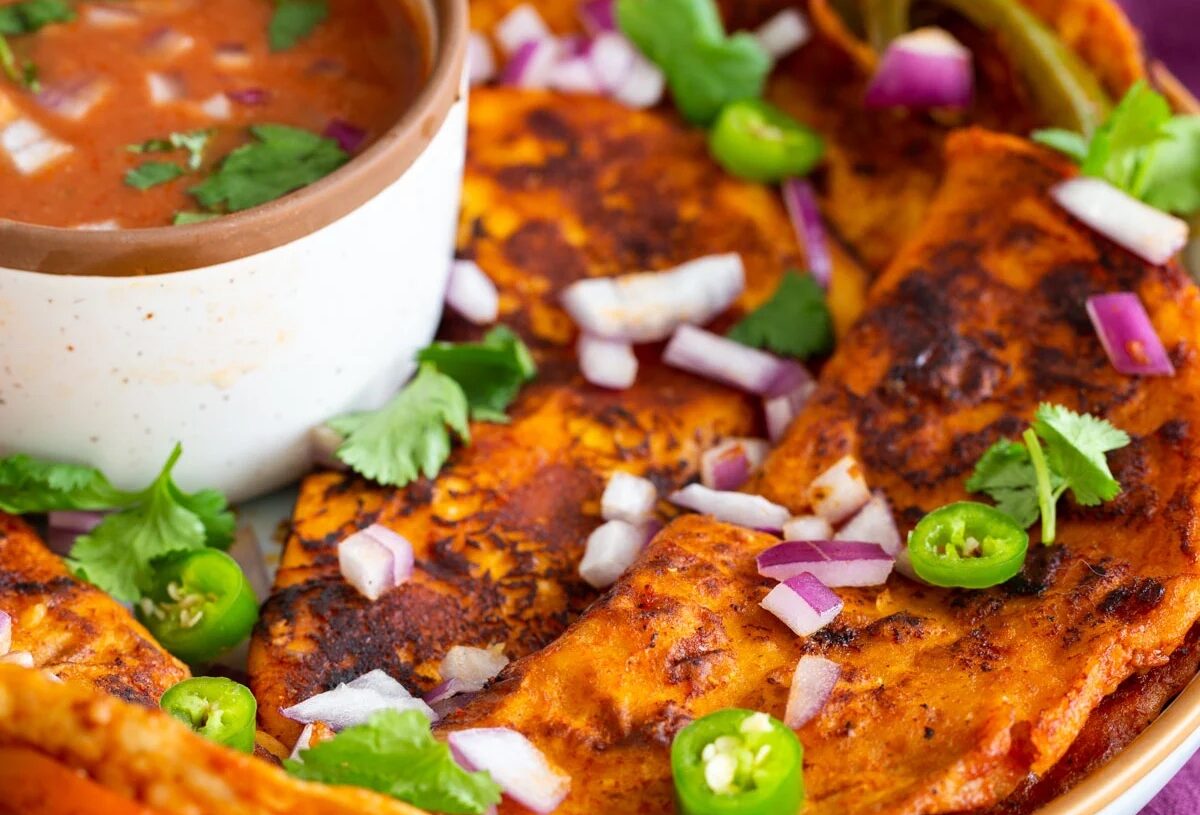 Vegan Birria Tacos with Tikka Masala Gravy – an Indian twist on a Mexican street food classic that you will LOVE! The vegan birria filling is made using mushrooms and peppers cooked with a fragrant taco spice blend. Nutfree Soyfree Glutenfree Makes 10-12 tacos

Ingredients
For the tikka masala sauce
½ cup (130 g) tomato paste (scant cup, not overly filled)
3 tablespoons non dairy yogurt or you can use non dairy cream such as coconut cream.
1-2 teaspoons garam masala
1 teaspoon ground coriander
1 teaspoon onion powder
1 teaspoon garlic powder
½ teaspoon salt
¼ teaspoon black pepper
1 teaspoon Kashmiri chili powder or paprika, Or use 1/2 teaspoon cayenne
½ teaspoon amchoor or dried mango powder, This is optional you can add in ½ -1 teaspoon of lime juice instead
1 ½ cups (350 ml) of water
For the taco filling
12 ounces (340 g) sliced mushrooms, fresh mushrooms like cremini, white, baby Portobello
½ green pepper thinly sliced
½ red pepper thinly sliced
½ red onion thinly sliced or 3/4 cup sliced onion
½ teaspoon of salt
¼ teaspoon black pepper
2 teaspoons or more taco spice blend
3-4 tablespoons of the tikka masala sauce from above
For serving
10 to 12 5 inch tortillas
1 cup vegan mozzarella cheese or other shredded cheese of choice
a few teaspoons oil as needed to cook
Chopped red or white onion, chopped cilantro, lime wedges and sliced jalapenos for garnish and serving.
Instructions
Make the tikka masala sauce; In a bowl, combine all the ingredients under tikka masala sauce and mix really well.
Press the tomato paste into the water mixture on the side of the wall and mix in so that the paste is mixed in really well. Taste and adjust salt and flavor. If you’d like tangy add in some lime juice and mix in. Set aside
For the filling, heat a skillet over medium high heat. Add 2 teaspoons of oil or add ¼ cup of broth.
Add in the mushrooms, peppers onion and a generous pinch of salt and mix well. Cook until some are starting to turn golden (3-5 mins) then add in the black pepper, taco spice and remaining salt and mix in.
Continue to cook for 2-3 minutes then add in 3 tablespoons of the mixed tikka masala sauce from above and mix in.
If the mixture is drying too much add a few splashes of water and continue to cook until the mushrooms are cooked to preference, then remove from heat and set aside.
Assemble the tacos. Heat up a skillet over medium high heat. Add a few drops of oil. Take 1 tortilla and dip it really well in the tikka masala sauce.
Then place the tortilla on the hot skillet. On one half of the tortilla, add some of the filling then top with cheese and continue to cook until the tortilla starts to get golden brown at the bottom then fold it and press.
Flip and press again for a few minutes so that it crisps up and the cheese melts then take off heat.
Repeat for all tortillas and plate them. Top the tortillas with chopped onions, cilantro, lime wedges, jalapenos if using.
Heat up the remaining tikka masala sauce in skillet or microwave until it comes to a boil. Taste and adjust salt and flavor. If you want it a little sweeter add in a little bit of maple syrup and mix in.
Serve: Place this in a small bowl to serve with tacos. To eat you want to dip each of the taco into the tikka masala sauce then dig in.

No comments to show.